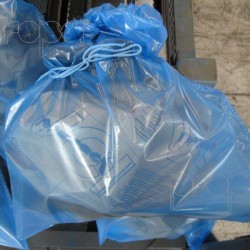 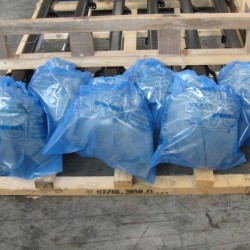 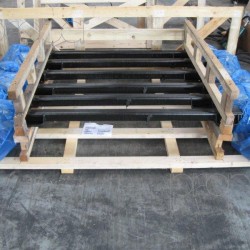 PROPATECH VCI EASYCAP is a particular application of PROPATECH VCI coextruded film specifically conceived to solve the problems of protruding metal parts.
The PROPATECH VCI FILM that makes up EASYCAP is made by adding the PROPATECH VCI additive to the polythene mass during the coextrusion of the three-layer film. The inner layer is for immediate protection, the middle layer is a reserve for long-term protection, whereas the outer layer acts as a barrier and contains the protective substance.
Simple, effective and rapid, PROPATECH VCI EASYCAP features an elastic band at its open end, which makes it like a "shower cap" capable of covering any irregularly shaped object without problems and assuring protection also in situations where this would be difficult or even impossible with other products.

Available in different sizes, PROPATECH VCI EASYCAP is especially recommended for protecting brake disks, small motors, flywheels, cylinder heads and variously shaped projections.
Unlike old oiling and greasing systems, PROPATECH VCI EASYCAP  is practical, low cost and pollutes less. The manufactured good is ready for use as soon as the packaging is opened and no pickling is required.